Location of the residence LA PRIMULA in Siena

LA PRIMULA is located in Via Porta Giustizia 4 di Siena.

LA PRIMULA is located behind Piazza del Campo in the heart of the historic centre of Siena.

Adjacent to Piazza del Mercato, close to the restaurants Papei and Malborghetto di Siena, our facility enjoys a privileged position which allows you to, in just a few minutes, walk to the major monuments and sights of the historic centre of Siena (such as the Cathedral, the Baptistery, the Museum of Siena, the beautiful Torre del Mangia, the Basilica of San Domenico, the Basilica of San Francesco, the Academy of Intronati in Siena, the Chigian Music Academy, the Italian Winery of Siena, the Catherinian Sanctuary and the House of Saint Catherine in Siena, and the ancient venue of the Bank Monte dei Paschi di Siena and the historic Faculty of Law in via Mattioli, the Faculty of Humanities and the Faculty of Engineering in via Roma near Porta Romana ). 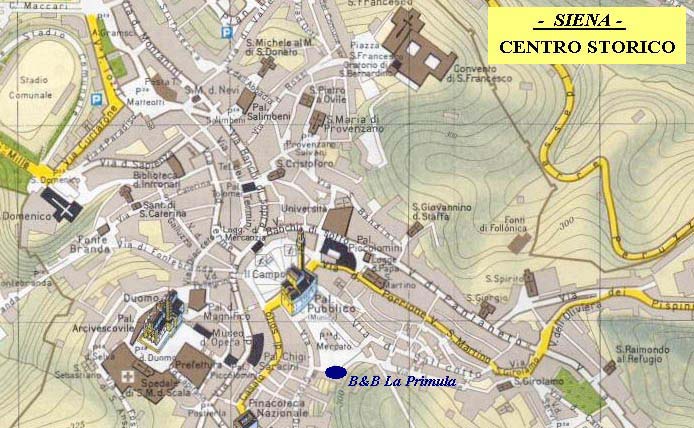 Located in the historic centre, this B & B in Siena is positioned in a restricted traffic area but it can be reached by car to load and unload luggage; parking areas or town parking lots are also found nearby.
Well connected to Siena’s Train Station and to the University for Foreigners as well as to the hospital, LA PRIMULA is located close to bars, shops, supermarkets, restaurants, taverns, wine bars, pizzerias, cinemas and pubs.

From the B & B LA PRIMULA Florence, Monteriggioni, San Gimignano, Castellina in Chianti, the Chianti hills and the Val D’Orcia (Pienza, Bagno Vignoni) and the Crete Senesi, Montepulciano and Montalcino can be easily reached, as well as many other places that make Tuscany one of the most attractive and visited regions in Italy.

How to get to LA PRIMULA

LA PRIMULA is located in the historic centre of Siena, in Via Porta Giustizia 4, just adjacent to Piazza del Mercato (near the restaurants Papei and Malborghetto) and behind Piazza del Campo.

A very short and pleasant walk connects our facility to the main monuments and the extraordinary beauty of the historic centre of Siena.

Moreover, it takes only about 10 minutes on foot to get to Piazza Gramsci (the town’s bus terminus) that is adjacent to Siena’s soccer stadium (called Artemio Franchi).

For those travelling by car, it is best to take the Siena Sud exit from the ring road and continue towards the historic centre to Porta Romana (which is the only gate from which access to the restricted area by car is possible).

Being in the historic centre in Siena, LA PRIMULA is located in the restricted traffic area but it is accessible by car to load and unload luggage, driving through Piazza Porta Romana and continuing towards the market (the B & B is in Via Porta Giustizia 4, near the Malborghetto restaurant).

Parking areas or town parking lots are close to this B & B in Siena.

If you are arriving by train, our hotel is well connected with the railway station of Siena through an efficient and almost continuous public bus service.
To reach LA PRIMULA take any of the direct busses to the historic centre of Siena; you will arrive in Piazza Gramsci (city bus terminus) and in less than a 10 minutes walk you will reach us right after passing through Piazza del Campo.

From Siena’s train station you can also reach us by car or taxi in less than five minutes, we are in Via Porta Giustizia 4.

If you are travelling by bus, our hotel is well connected with the bus terminal (regional or national) which is located in Piazzale Carlo Rosselli (just opposite the railway station of Siena).

From Piazzale Carlo Rosselli, thanks to an efficient and almost continuous public bus service, you can reach the historic centre of Siena in just a few minutes either by car or taxi in less than five minutes. We are in Via Porta Giustizia 4.

For those arriving by plane, the nearest airport is located at Ampugnano-Sovicille (SI) about ten kilometres from the centre of Siena. The most important airports, situated near Siena are those of Florence, Pisa, Bologna and Rome.

Siena can be reached from these airports by bus, train or taxi.

How to reach us?

LA PRIMULA is in Via Porta Giustizia 4 - SIENA

LA PRIMULA is in Via Porta Giustizia 4 - SIENA